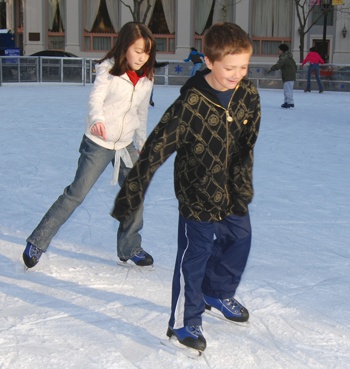 Once there was a man whose wife gave him twins: a son and a daughter. He was very happy with his lovely wife and very proud of his beautiful children. He named his son Aaron and his daughter Sharon.

One day the twins, now five years old, were watching the winter Olympics on television. They were fascinated with the figure skaters. When it was time for them to go to bed, they pleaded with their mother and father to let them stay up to watch the skaters complete their routines. After some thought, the parents let them stay up until the skating was over.

After the twins went to bed, the man and his wife talked about the twins’ strange fascination with the figure skaters. Also, their insistence to stay up past their bedtime was unusual; they always went to bed when they were told to do so.

The next day Aaron and Sharon told their father that they wanted to become figure skaters like the ones they saw on television. At first the father laughed, but when he saw that they were serious, he explained to them that it would take a long time and a lot of hard work to learn to skate like that. Also, that it would take a lot of money to buy their skates, clothes and to pay for someone to teach them.

They told him that they were willing to do whatever it took to learn and that they could sell lemonade to help pay for their lessons. The father was touched by their sincerity, and his love for them was stronger than his misgivings of such an undertaking. He told them to really think about it some more, and that they would talk about it again next week.

Aaron and Sharon were ecstatic! They went out in the garage and found their old roller skates and every day for the next week, they practiced skating the best they could, but they were not very good.

True to his word, their father talked with them the next week. He had noticed that they had been practicing with their skates and just about knew what their answer would be. However, he asked them, anyway, if they still wanted to be Olympic skaters. Their answer was an emphatic yes! Knowing this beforehand, he had purchased their first pair of ice skates and had arranged for them to go to the nearby skating rink to take skating lessons three times a week. They were so overjoyed; they almost knocked him over with their hugs and kisses.

The first week or so went pretty good. Then the novelty began to wear off. The father worked with them and encouraged them to continue, reminding them that they had said that they would do anything to learn how to skate. His persistence paid off and they continued with their lessons.

Ten years later, Aaron and Sharon had won every skating competition in their area. Now it was time to go on to compete in the State competitions. Being used to winning, they were devastated when they lost their first meet. They came home with tears in their eyes, hearts and spirits broken. Aaron was ready to hang up his skates and forget the whole thing.

Their father, undaunted by their loss, held them in his arms and told them that he loved them and that he had faith in them and knew that they would eventually win the State championship. His love, faith and sincerity consoled them and they agreed to work even harder.

The next year was a difficult one. Aaron and Sharon were getting tired of the long hours of practice. They complained that they were missing the parties and the good times their friends were having. Plus their schoolwork was getting harder.

The training and other expenses were increasing at an alarming rate. There were new uniforms to buy, fees for competitions, travel expenses, etc. Although their father was not a poor man, he was not rich either. The family car was beginning to show it’s age, but the father insisted that he could fix it up so that it would last another year, and that his shoes could be resoled instead of buying a new pair.

The mother cut the food budget by making casseroles, spaghetti and other simple foods to help out. She also made some of her clothes instead of buying them at the department store.

On numerous occasions both the mother and the father would stay up late at night praying for Aaron and Sharon.

Finally, the big day of the State competition came. The winners would go on to the National competition and the winners there would be headed for the Olympics. Aaron and Sharon were very nervous when it came time for them to skate. Both their father and their mother were with them. Just before they went out on the ice, their father told them that he loved them no matter what the outcome and that he would be praying for them. He also told them to relax and do the best they could, it was all anyone, even God, could ask of them. They won the State championship!

Next the National “championships.” Once again there were sacrifices to be made. Also, due to the expenses, neither father nor mother could accompany Aaron and Sharon to the competition. They said their good-byes at the airport. Their father was smiling from ear to ear and his chest puffed out so far that his buttons almost popped off. He told them that he loved them very much and that he knew that they would win! They won the National championships!

Two years later, Aaron and Sharon won the gold medal at the Winter Olympics! When they returned home, there was a large crowd waiting for them. It appeared that the whole town had come out to welcome them home. Everyone was admiring the gold medals that hung around their necks. They were so happy.

Later that evening, Aaron and Sharon asked their parents to come into the living room; they had something they wanted to tell them. The father and mother came in and sat down. The twins stood there in front of them looking a little uneasy. The father, concerned, asked them if something was wrong. They replied that no, nothing was wrong, it was that they did not know exactly how to say what they wanted to say. Both parents, at almost the same time, sensed what they were trying to say and their hearts went out to them in great waves of love. The mother told them it was all right, and to tell them what was on their minds.

Sharon spoke up first. She told them that she could never repay the love, faith, and confidence that they had shown her all those years of trials and heartbreaks and the expense that was required to get them to the Olympics. Tears streamed down her cheeks as she hugged first her mother and then her father.

Then Aaron spoke, holding back the tears that were trying to break through to the surface. He repeated Sharon’s thoughts and stated that he now knew what love really meant. It meant sacrificing for those whom you love with no thought of reward in return, just the helping and caring because it needed to be done. Like fixing his broken skate, soothing his wounded ego and crying with him when he lost a competition. Staying up all night with him that time he sprained his ankle. Love is being more than a parent; it is also being a friend.

With this, he could not hold the tears any longer as he went to his mother and father and hugged them both. By now they were all crying.

Then the mother, wiping her tears on her apron, announced that it was time for dinner. The twins told her there was one more thing they had to do before they ate. Aaron asked his mother and father to stand up. They did as they were asked. Then Aaron and Sharon took their gold medals from around their necks and placed them around their parent’s necks and said, “We want you to have these. Let them be our gift of love to you!”

This story can be likened, in a small way, to the love of our Heavenly Father for His children, us! His love was so great for us that He gave us His only son Jesus Christ, who in turn made the supreme sacrifice of giving us His all, His life. God’s love and presence is always there and, like the father who bought the skates before they asked, our Lord knows our needs before we ask and He is ready to provide them, if we will only open up our hearts and minds and let Him.

Jesus said “…Lo I am with you alway, even to the end of the world…” Matthew 28:20 (KJV) However, we must willingly spend the time and put forth the effort necessary to qualify for the Heavenly Olympics. Then we must go on to win the heavenly prize.

God created this earth for us, His children. Then He created us to have dominion over the earth and to become perfect, as He is perfect: “Be ye therefore perfect, even as your Father which is in heaven is perfect.” (Matthew 5:48) He sent us into this world to learn and “train” for our heavenly mission and we must return to Him with the gold medal of our overcoming (the gold tried in the fire) and present it to Him—in love.