The Light Has Come! 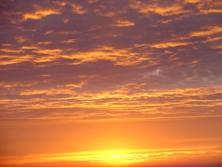 During this time around Christmas, many people’s thoughts turn toward our Lord Jesus and His amazing birth among mortal men. People remember the angels, the shepherds, the long journey to Bethlehem, fleeing Herod by night, and generally speaking the world, if even for a moment, breathes of peace on earth good will toward men.

But do we really think about what the coming of Christ means for us? I’m not talking about the pat answer that He came to die on the cross and bring salvation for our sins. Let’s take a moment to take a step back and remember the big picture.

God never wanted us to have pain or sorrow or death. Back in the beginning, He made a special planet for us, His special children, to live on. He meant for us to grow and learn and walk with Him. Earth was such a special creation – and it was a target for the rebellion started in heaven. Satan wanted to destroy God’s children as a way to “hurt” God. So he took the form of a serpent and beguiled (lied to) Eve to get her to disobey God. Satan knew God’s laws were just and that sin or disobedience to God would bring unimaginable pain and death – because that was God’s law. God couldn’t/wouldn’t cease to be God and change His laws. The law required the penalty of death.

After Eve’s disobedience, Adam made the choice to sin as well, and we know the rest of the story of how death came into the world. As far as Satan was concerned, he probably felt like he had won. Earth’s paradise state was lost; God’s children now were cursed with the penalties of the law and the consequences of death and pain; and the dark had seemingly succeeded by the hand of God’s own children.

However, God had a plan. He even foreshadowed it in his words to the serpent:

“And the Lord God said unto the serpent, Because thou hast done this, thou art cursed above all cattle, and above every beast of the field; upon thy belly shalt thou go, and dust shalt thou eat all the days of thy life: And I will put enmity between thee and the woman, and between thy seed and her seed; it shall bruise thy head, and thou shalt bruise his heel.” Genesis 3:14-15

From the beginning, God is sovereign and has a plan that will not be thwarted. It is a plan of love. He knew the penalty of the law and was willing to give up His very own only Son in order to pay for us – for our return unto Him. He gave His people pictures of His plan in the sacrificial laws of the Israelites. You can see that same picture painted in the story of the Passover.

The Word that was with God that John is talking about is Jesus Christ. (John 1:14, might want to read the whole chapter) You see, Christ was the source of the light. He is the source of life. By bringing separation from Christ, Satan sought to bring death to God’s children and darkness to rule the world.

However, God’s plan was bigger. By sending Christ into the world, He sent the Light into the world. How do you overcome darkness? By turning on the light. How do you bring life again? By giving that light, that life, to each person who desires it.

“That was the true Light, which lighteth every man that cometh into the world.” John 1:9

Not only did Jesus come to “die on the cross” for our sins as the sacrificial lamb, but He brought LIFE. That eternal life is available to each of us – here and now.

The plan of evil started in the Garden of Eden to have all mankind destroyed was thwarted for all time.

“For God so loved the world, that he gave his only begotten Son, that whosoever believeth in him should not perish, but have everlasting life.” John 3:16 (emphasis added)

When you think of our Lord Jesus being born into this world, remember what He came to bring. Remember Who He is, and that He lives in you. Remember that God has made a way for all to return to Him as He promised. Remember that the world that has walked in darkness has seen a great Light, and those who dwelt in the land of the shadow of death, upon them has the Light come. (Isaiah 9:2)

When you are faced with life’s challenges and trials, and the battle seems fierce around you, remember that the Light has already conquered the darkness. Remember when you feel alone or afraid, that light lives inside of you. When all seems lost, remember God’s faithfulness and unfathomable love that saved a world in darkness.

Remember that the Light has come! Not just to the world, but it has come to you.