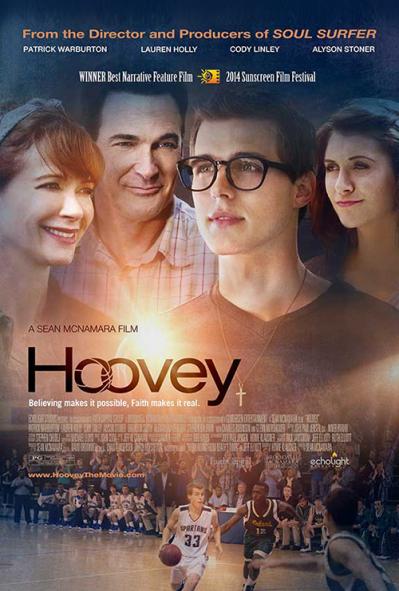 When promising high school basketball player Eric “Hoovey” Elliott collapses on the court, doctors discover a life-threatening brain tumor. Hoovey will survive the high-risk surgery, but at what cost? Can he relearn to walk, read, even to see clearly? The road is long, and meanwhile overwhelming medical bills threaten to undo everything his parents, Jeff and Ruth, have taken a lifetime to build.

With seemingly no one to turn to—but with tenacity and love born of faith—an entire family regains its footing. Hoovey learns to read again, to dribble and shoot a basketball and, finally, stepping out in faith, he’s back on court for another shot at his dream…

Hoovey is an inspiring movie based on the true story of Eric “Hoovey” Elliott. The story follows his promising young life and the dreams that he had to play basketball. All that seems to come crashing down around him after they discover a very large brain tumor. They successfully operate, but it leaves him having to relearn simple things such as walking, reading, and balance. Because of the surgery, he also runs the risk that if he receives a blow or impact to his head, it could kill him – consequently, ending the possibility of sports.

This story is really about faith – the faith of Hoovey, the faith of his family struggling to deal with the crisis and its aftermath, and the impact of that faith on the people around them.

I loved the way they displayed the love the Elliott family had for each other. I also love the true Christian meekness Hoovey displays to another player who acted as his enemy during so much of the movie. After Hoovey fights his way back to recovery and ends up on the court, he faces angry opposition from that player, but responds in such a fearless, meek manner that it makes a huge impact on the player.

There is no real objectionable content in this film. There are a couple of times where words such as “dork” are used and there is a moment when a teenage couple kisses each other briefly, but there is no language, sex, nudity, or violence.