The Book of Daniel 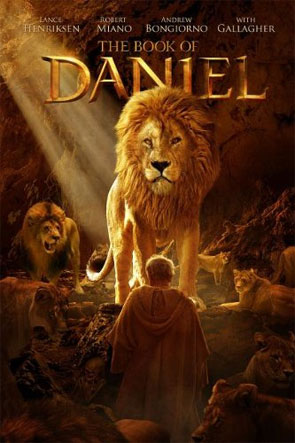 Taken into slavery after the fall of Jerusalem in 605 B.C., Daniel (Robert Miano) is forced to serve the most powerful king in the world, King Nebuchadnezzar. Faced with imminent death, Daniel proves himself a trusted advisor and is placed among the king’s wise men. Threatened by death at every turn Daniel never ceases to serve the king until he is forced to choose between serving the king and honoring God. With his life at stake Daniel has nothing but his faith to stand between him and the lions’ den.

The Book of Daniel is a faithful retelling of the story of Daniel found in the Bible. Impressively, it follows the historical details of Daniel’s service to the kings of Babylon after he was taken into captivity as he remained true to God.

While the film does not cover every prophecy found in Daniel, it covers the heart of his story as he and his three friends refuse to defile themselves, as they stand before Nebuchadnezzar and reveal the dream that the king had and its interpretation, and as his three friends are thrown in the fiery furnace. It shows you King Belshazzar and the fall of Babylon, the rise of Darius, and Daniel’s trial in the den of lions. The viewer is brought full circle back to the promise of the return of God’s people to Jerusalem.

This film was very well done. There is only one weak moment of special effects, but other than that, you are quickly lost in the story watching how God shows His faithfulness and blessing to those who are true to Him. The film also illustrates the integrity and surety of God’s prophecies and their fulfillment, down to the details about King Cyrus.

There is no graphic or objectionable content in this film. There is one moment where a man is killed on screen during the fall of Babylon, but it is very brief, there is no blood, and you see it but you don’t see it. There is the implied death of 3 individuals, but you don’t see anything. Also, because of the time period, history, and facts of the story, there are magicians, sorcerers, and astrologers, but they are never presented in a positive light.

God as Sovereign Lord and faithful to His promises is highlighted in this film. I believe this film is also timely because it reminds us to be faithful to God, especially when we live in a society that does not follow God or is against Him. This is an excellent film.