The Gospel of John 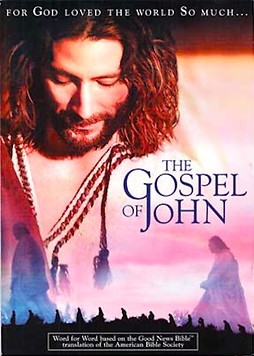 The Gospel of John, the best-loved of the four Gospels.

The Gospel of John vividly comes to life in a faithful and powerful dramatization of the Biblical text. The Gospel of John meticulously recreates the era of Jesus during a tumultuous period that changed the course of history.

Starring Henry Ian Cusick as Jesus, and narrated by Christopher Plummer, and with a cast of 2500, The Gospel of John has been adapted for the screen, word for word, based on the American Bible Society’s Good News Bible by Emmy nominated John Goldsmith and is directed by acclaimed British director, Philip Saville. Rated PG-13 (for violence involving the crucifixion).

This is a fantastic visually powerful retelling of the Gospel of John, word for word. Jesus is powerfully played and because the script follows the exact language of the Good News Translation, the verses come to life as you see them played out. From the woman at the well, to the healing of the man born blind, this film doesn’t rely on overdone special effects to deliver the story, but the simplistic moments that draw you into the miracles as they most likely happened.

I love how the sermons of Jesus are delivered and especially enjoy the prayer of Jesus from John chapter 17. The resurrection and ending of the gospel leaves you with hope and a hunger to personally draw closer to Jesus Christ and understand his words.

The story is visually compelling, which leaves a couple caveats to be aware of before viewing. First, the whipping of Jesus and the violence of the crucifixion you will probably want to skip – especially with children. They handle much of it tastefully, but even the breaking of the other prisoners’ legs at the crucifixion, while not shown, is very intense and I would skip. I strongly suggest previewing it before showing it to your children.

Also, they made a few choices artistically which I found distracting from who Jesus was, mainly his garments in some scenes were way too wide open, exposing much of his chest unnecessarily. I did not notice it the first several times of viewing, but found it distracting after someone pointed it out. There are also a couple of moments where a female was probably trying to depict awe, but it ended up coming across as possible physical attraction.

Other than that, most of the movie is edifying and helps bring to life the words of Jesus in a memorable, powerful way.