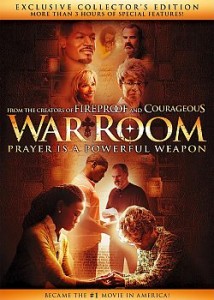 From the award-winning creators of Fireproof and Courageous comes WAR ROOM, a compelling drama with humor and heart that explores the power that prayer can have on marriages, parenting, careers, friendships, and every other area of our lives.

Tony and Elizabeth Jordan seemingly have it all—great jobs, a beautiful daughter, and their dream house. But appearances can be deceiving. Tony and Elizabeth Jordan’s world is actually crumbling under the strain of a failing marriage. While Tony basks in his professional success and flirts with temptation, Elizabeth’s bitterness only increases.

But their lives take an unexpected turn when Elizabeth’s newest client, Miss Clara, challenges Elizabeth to establish a prayer “war room” and a battle plan of prayer for her family. As Elizabeth begins to fight for her family, Tony must decide if he will make amends.

As Miss Clara wisely says, “Victories don’t come by accident!” A #1 movie in theaters, WAR ROOM is filled with more of the authentic characters loved by millions in previous Kendrick Brothers’ films and a vivid reminder that prayer is a powerful weapon.

WAR ROOM is easily one of the most inspiring movies ever made. We live in a day and age where the world is telling us to compromise, to be fearful of the events around us and to be afraid to speak the truth. We are engaged in a battle for the soul of our nation, our communities, and our families and our children. This movie addresses these issues head on. It unapologetically asserts how we need to be doing our fighting in prayer.

Tony and Elizabeth Jordan are struggling in their marriage and almost every interaction ends in a fight. When Elizabeth, a real estate agent, meets Miss Clara, she says, “There’s one thing we do well, and that is fight.” That’s when Miss Clara makes the point that Elizabeth isn’t winning the battle that way. When Elizabeth finally realizes how her marriage is affecting her daughter and reaches a breaking point, she is able to hear the wisdom in trying a new strategy for fighting: prayer.

As with anything we step out in faith to do, Elizabeth is tested before she even gets really started, but I love how the film depicts that when we let God do our fighting, He is well able to defend us and more. This movie shows the power of prayer, the importance of praying with commitment, focus, and standing on the Word of God, as well as the impact that prayer has on others, giving them the opportunity for change and healing if they will accept it.

While the story addresses tense marital issues and shows one of the characters struggling with the temptation to be unfaithful, nothing is shown. There is a comment stating that if a character isn’t getting “it” from his wife, he must be getting it somewhere, which will probably go right over the heads of small children. One dream scene briefly implies/alludes to a man having hit a woman, a man tries to rescue her and the man starts to fight him, but there is nothing gratuitous. There is no language or sex in the film.

WAR ROOM tells a heartfelt story that we can all relate to and sprinkles in the serious with doses of humor. It ends leaving you inspired to make changes in your own prayer walk with God. WAR ROOM issues a clarion call to this generation of believers to pick up the war cry and get on our knees – not randomly or haphazardly, but with dedication and standing on the Word of God.