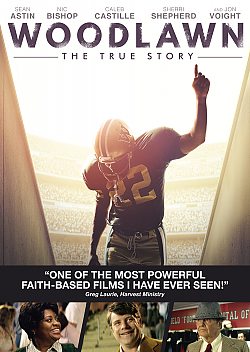 A gifted high school football player must learn to boldly embrace his talent and his faith as he battles racial tensions on and off the field in WOODLAWN, a moving and inspirational new film based on the true story of how love and unity overcame hate and division in early 1970s Birmingham, Ala.

Tony Nathan (newcomer Caleb Castille) lands in a powder keg of anger and violence when he joins fellow African-American students at Woodlawn High School after its government-mandated desegregation in 1973. The Woodlawn Colonels football team is a microcosm of the problems at the school and in the city, which erupts in cross burnings and riots, and Coach Tandy Gerelds (Nic Bishop) is at a loss to solve these unprecedented challenges with his disciplinarian ways.

It’s only when Hank (Sean Astin), an outsider who has been radically affected by the message of hope and love he experienced at a Christian revival meeting, convinces Coach Gerelds to let him speak to the team that something truly remarkable begins to happen. More than 40 players, nearly the entire team, black and white, give their lives over to the “better way” Hank tells them is possible through following Jesus, and the change is so profound in them it affects their coach, their school and their community in ways no one could have imagined.

At the first glance of the cover of Woodlawn, you may be thinking “football movie.” However, the strongest themes of this film are redemption, revival, and healing. It is based on a true story that reminds us that God can move in the most unexpected way to accomplish His will.

It’s 1973 in Birmingham, Alabama – the city that was so aflame with racial tension, segregation, and hate crimes it was dubbed “Bombingham.” Woodlawn High School is forced to integrate and the situation reflects the trouble of the city with ongoing violence and police patrolling the school hallways.

Tony Nathan is one of only a handful of black players on the mostly white football team. He is talented, but faces racial tension all around. Coach Tandy Geralds is laboring to keep the peace in the school and on his team. Frustrated and threatened by school officials and parents, he struggles to get their football season underway. When an outsider, a young sports chaplain by the name of Hank, persistently requests to speak to the team, Tandy finally gives in and gives him five minutes.

An hour later, almost his entire team gives themselves to the Lord. The changes that transform the young people spread out to the school, the staff, their football rivals, and the city. Watching the change in his team, the coach is faced with a decision of his own. Tony Nathan, the naturally talented runner on the team, also faces decisions. Should he press forward in football? It seems to cause pain to his family when he becomes a target.

Both Tandy and Tony realize something bigger than themselves, bigger than winning football games, bigger than their fears is at work. This film will leave you inspired and in awe of what God can do with faith in impossible times. This movie speaks directly to our day as we are in need of the same revival that turned an entire city around.

Parents will want to know that while all racial tension is handled very tastefully, there are some scenes that show the reality of what black families had to face during that time – including a scene where a brick is thrown through the window and scares a little boy, as well as yelling and screaming by angry high school students. If you preview the movie first, you can be prepared to discuss these historical realities with your children. The movie steers away from any inappropriate material and is very family-friendly.