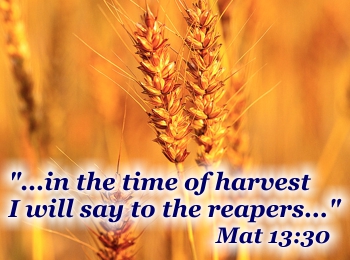 Have you noticed lately that issues are getting hotter, stakes are getting higher, and more and more people are making choices for what they do or do not believe? Look at the hot-button issues going on right now. People are being forced to “accept” (and endorse) what they believe is sin or be persecuted, fired, sued, labeled, etc. They want to force companies and individuals to support sinful lifestyles and the killing of innocent babies. This is not just a whim. Laws and governing bodies are trying to write these ideas into law and Christians are having to fight these issues in court or give in for the sake of their livelihood.

Have you noticed how “divisive” and polarizing these issues are even within the “church?” Some churches are going so far as to endorse and elect those living in these sinful lifestyles as their pastors or priests.

Choices are being made.

If we think that we can be in the middle about these issues and try to stay on “safe” territory, not ruffling anyone’s feathers, then we are mistaken. Rest assured, everyone is being given a choice. It will come down to life and death for many (see Revelation 13:15, etc.). The issues of good and evil are not fuzzy gray – they are black and white. There IS no middle ground.

“And unto the angel of the church of the Laodiceans write; These things saith the Amen, the faithful and true witness, the beginning of the creation of God; I know thy works, that thou art neither cold nor hot: I would thou wert cold or hot. So then because thou art lukewarm, and neither cold nor hot, I will spue thee out of my mouth.” Revelation 3:14-16

If you read Revelation at the end of chapter 9, it speaks of terrible things that will happen, but the people were not repenting. It was as if God was giving them choice after choice, but they were saying no to Him. God is allowing everyone a choice. We can choose life (God) or death (Satan).

Jesus spoke of this action of God separating the good from the evil in a parable.

“Another parable put he forth unto them, saying, The kingdom of heaven is likened unto a man which sowed good seed in his field:

“But while men slept, his enemy came and sowed tares among the wheat, and went his way.

“But when the blade was sprung up, and brought forth fruit, then appeared the tares also.

“So the servants of the householder came and said unto him, Sir, didst not thou sow good seed in thy field? from whence then hath it tares?

“He said unto them, An enemy hath done this. The servants said unto him, Wilt thou then that we go and gather them up?

“But he said, Nay; lest while ye gather up the tares, ye root up also the wheat with them.

“Let both grow together until the harvest: and in the time of harvest I will say to the reapers, Gather ye together first the tares, and bind them in bundles to burn them: but gather the wheat into my barn.” Matthew 13:24-30

If this is the time of the harvest as stated in the last verse above, then decisions are being made.

I believe this is the time of the harvest. The Gospel is being preached in the far corners of the earth and His Word translated into many obscure languages (Matthew 24:14). Jesus said that the fields were already white to harvest (John 4:35). The harvest happens at the end of the world (Matthew 13:39).

There is no middle ground.